Remarkable improvements could be achieved by a 30-year-old woman who participated in a recoveriX treatment for the upper extremity in Schiedlberg (Austria). At the young age of 29 years, she suffered an ischemic stroke of the medulla oblongata resulting in her right side being impaired. Eleven months after her stroke, she enrolled as a recoveriX patient in Schiedlberg (Austria) for the rehabilitation of her upper extremity.

The pre-assessment, which is done before the first therapy session, showed that she was minimally impaired. Specifically, her Upper Extremity Fugl-Meyer Assessment score was 45 out of 66 points. While this is typically referred to minimal impairment, it does not mean that her left (healthy) and right (affected) side function even remotely equally well. This can be seen if you take a look at the picture below, which shows her Box and Block test and the 9 Hole Peg test for both the healthy and affected side. The Box and Block test assess hand dexterity and the patient has to try to put as many blocks as possible from one box ipsilateral to the other box contralateral in one minute. The 9 Hole Peg test assess finger dexterity and the patient has to put 9 pegs (i.e., sticks) from a container ipsilateral in 9 holes contralateral and then back into the container again, as fast as possible. Both these tests show that there is a clear difference in fine motor skills between her healthy and affected side. However, this is to be expected, as the two tests are very difficult for stroke patients. To put it into numbers, only 20% of patients could perform the 9 Hole Peg test in our study, because it requires significant fine motor skills.

“Healthy” and “Affected” refers to the respective hand of the patient. The gray arrow shows that for the Box and Block test a higher score (i.e., more blocks) is better. For the 9 Hole Peg test a lower score (i.e., less seconds) is better.

The patient was able to control the recoveriX system extremely well obtaining an average classification accuracy of 91% across all 25 therapy sessions. In other words, the computer (algorithm which is used to decode the imagined movements) was able to detect her imagined movement 91 out of 100 times correctly. In the 8th therapy session, she reported that she is able to move her affected hand better. This we can also see when looking at the Box and Block test, as well as the 9 Hole Peg test, which she performed four times throughout the therapy treatment. There is clear improving trend in both tests throughout the therapy.

Both the Box and Block test and the 9 Hole Peg test are performed in the pre-assessment, the 6th, 11th, 16th, 21st therapy session and the post-assessment. Here the scores of the affected side are shown and the gray arrows indicate whether a high or low score is desirable.

The post-assessment, which is done after the last therapy session, showed that her Upper Extremity Fugl-Meyer Assessment score improved by 11 points, from 45 to 56 points. In other words, her upper extremity function improved! Specifically, these improvements were observed for her shoulder, forearm, wrist and hand function. 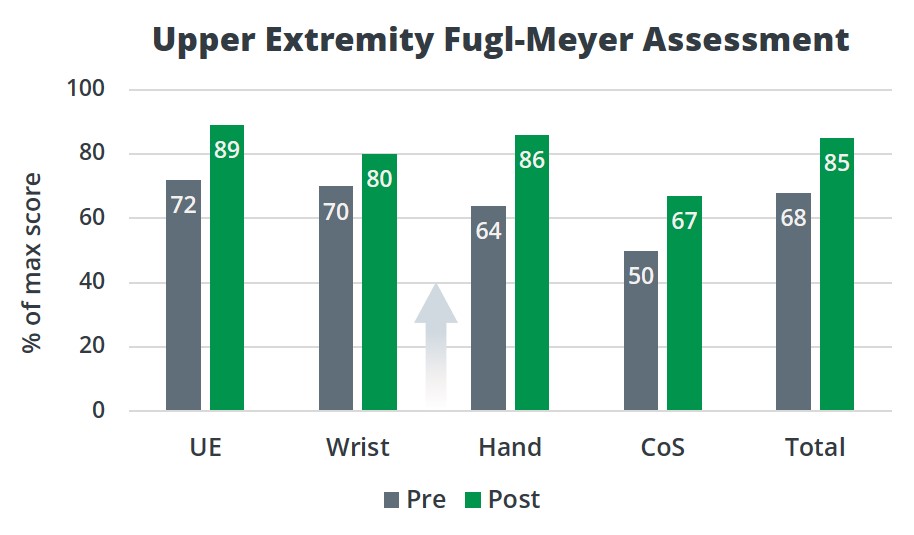 The improvement in fine motor skills we can also see when looking at the Box and Block test, as well as 9 Hole Peg test. In fact, we can even share them with you, because we are recording these tests for all patients. Her Box and Block test improved by a staggering 86% from 21 to 39 blocks. Similarly, she was more than one minute faster at performing the 9 Hole Peg test (59% improvement from 2:35 to 1:04 minute).

Computer
Here “computer” refers to the algorithm which is used to decode the imagined movements.

Ipsilateral
Situated or appearing on or affecting the same side of the body.

Contralateral
Occurring on, affecting, or acting in conjunction with a part on the opposite side of the body. The motor cortex controls contralateral muscles.