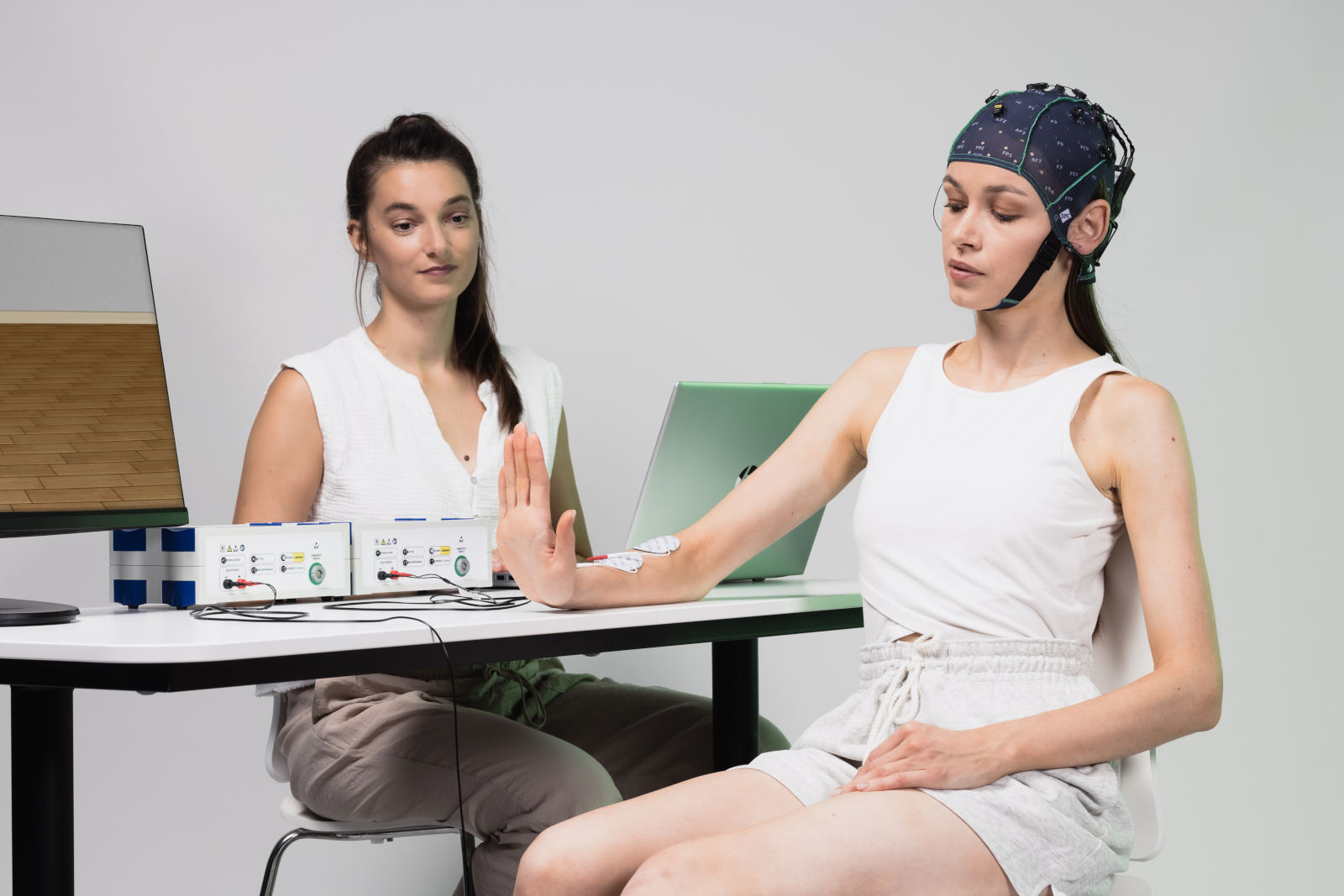 The baseline impairment of patients was on median 19.0 points with 35, 9 and 7 patients being severely, moderately and mildly impaired, respectively [5].
Patients improved on average by 4.8 points in FMA-UE. Performing a statistical test (two-tailed paired t-test) resulted in a highly significant difference in mean FMA-UE scores before and after recoveriX treatment. 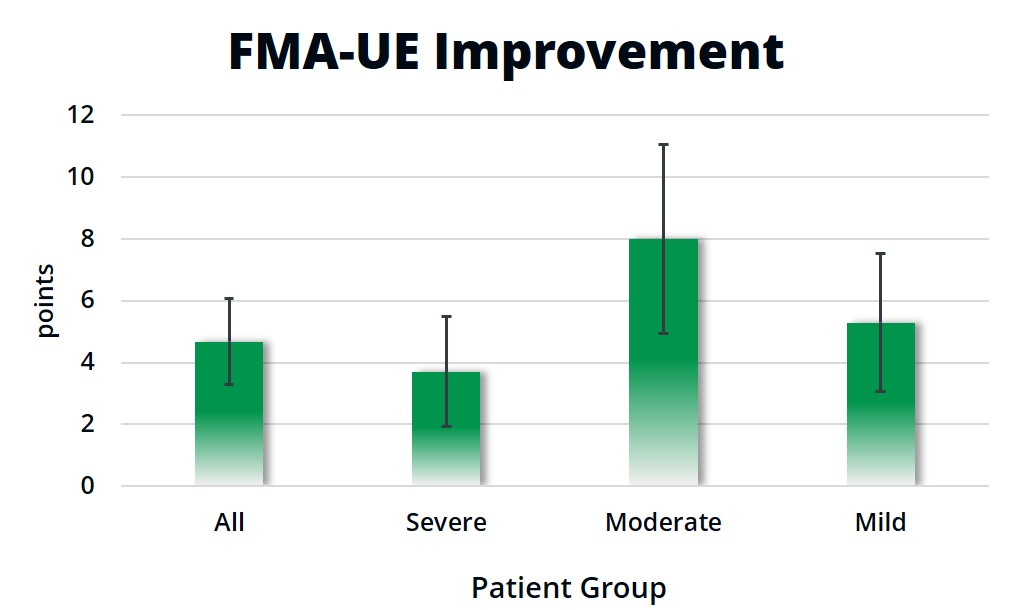 Note that in the study we did not observe a significant improvement in 9-Hole Peg test for the affected hand. This is because only 9 out of 51 patients could even perform this test, because it requires substantial fine motor skills 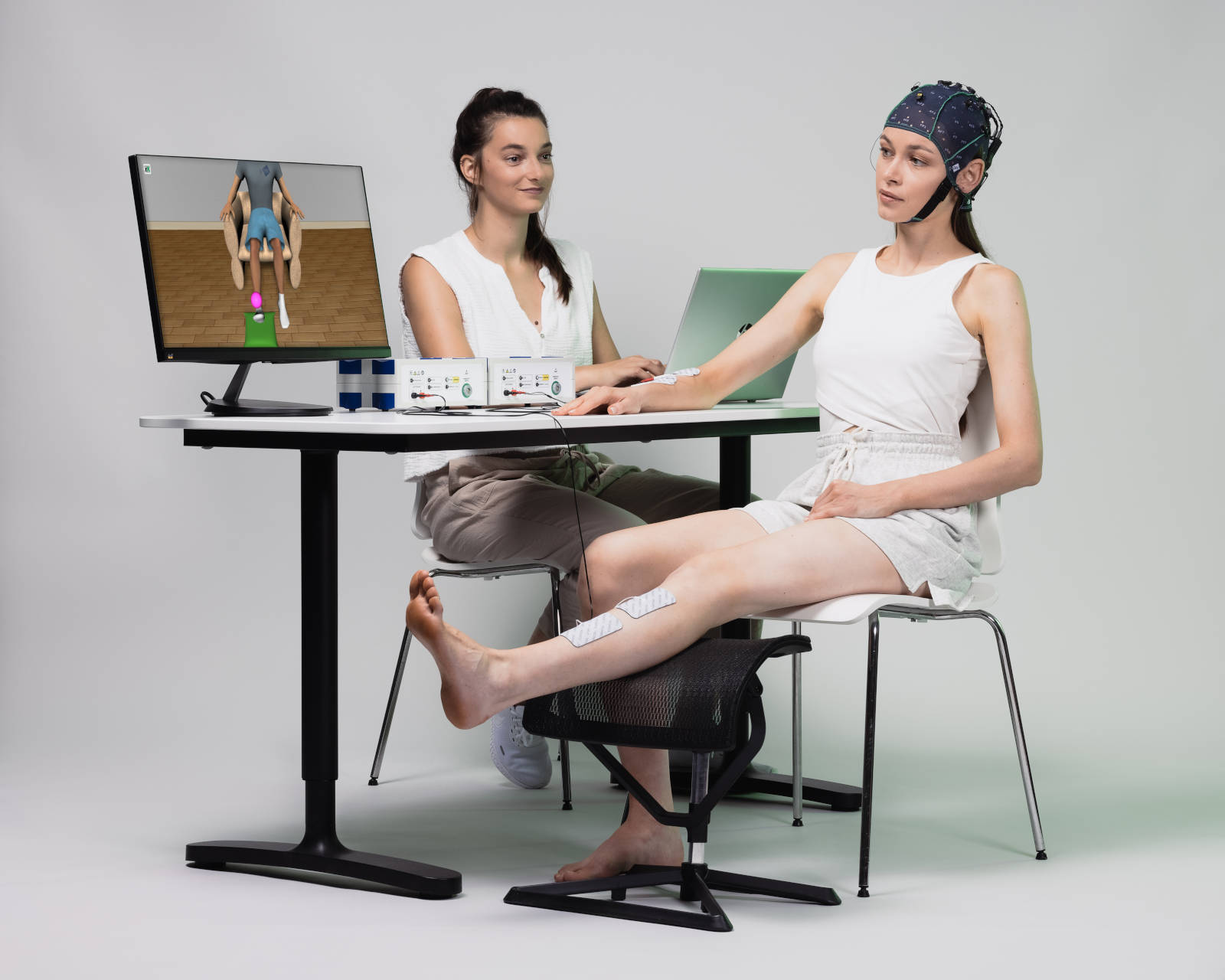 The efficacy of our recoveriX lower extremity therapy was investigated in 25 stroke patients. As three patients withdrew their participation 22 patients remained with 9 of them being female. 21 patients were in their chronic phase and one was in their subacute phase. The primary outcome measure was gait speed, assessed using the 10-Meter Walk Test (10MWT). All patients performed 25 sessions of one hour of recoveriX therapy distributed across 3 times per week.

Patients’ 10MWT improved significantly by 1.0 second. In other words, patients were able to complete the 10MWT quicker after the recoveriX therapy. In terms of gait speed patients also showed a significant improvement by 0.16 m/s with the mean improvement in gait speed being 0.19 m/s.

These results show that patients’ gait speed, assessed by the 10MWT, improved significantly. In fact, this improvement exceeds the substantial meaningful change defined by Perera et al. (2006) [9]. Patients show a significant improvement in gait speed after 21 sessions (analyzed using a repeated measure analysis). Therefore, the protocol based on 25 sessions distributed across 3 times per week, was found to be a good dosage.

Comparison of recoveriX with other treatments

We chose to compare our recoveriX lower extremity therapy with one of the most effective treatments in the literature for gait rehabilitation in stroke patients: Electromechanical Gait Training with End Effector devices (EGAIT-EE). EGAIT-EE was identified to be the most effective by performing a meta-analysis. The meta-analysis originally included 95 randomized controlled trials with a total of 4458 patients. The primary measure used to evaluate the walking ability was the gait speed. The EGAIT-EE group improved significantly in gait speed compared with the control group by 0.15 m/s on average (P < 0.001).

Patients in their chronic phase showed a change in gait speed of 0.11 m/s in the EGAIT-EE group [10]. In comparison for recoveriX we observed an improvement of 0.19 m/s. Importantly, recoveriX does not need the use of a body weight support system as patients are seated during the recoveriX therapy. Therefore, the risk of falls is completely eliminated, while patients can still train their gait patterns and increase their motor functions, gait speed, coordination and balance. 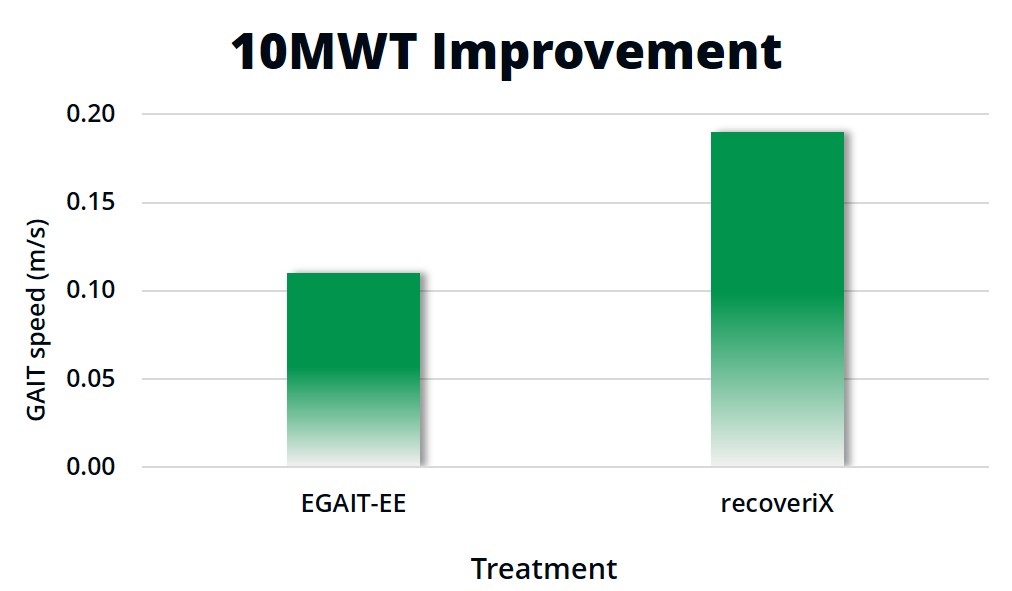 10MWT Improvement reflecting the increase in GAIT speed in m/s for EGAIT-EE and recoveriX treatment.

recoveriX is compared to many control groups

The Upper Extremity Fugl-Meyer Assessment (FMA-UE) is an assessment for evaluating and quantifying motor function of the upper extremity in stroke patients. The scale ranges from 0 to 66 points, with 66 points being the best motor function a patient can have.