Dramatic Improvement After No Success in the First 17 Sessions

The recoveriX stroke therapy led to rapid functional improvements after getting rid of spasticity in the first 17 sessions in a chronic stroke patient. In this interview, Christoph Guger explains the impressive results of a patient Mr. Brandstetter who improved dramatically and rapidly, despite seeing no functional improvements at all for the first 17 recoveriX sessions.

Recently, there was an interesting case where a patient did not show motor improvements in the first 17 session. What happened?

Christoph Guger: The 53 year old man suffered a stroke 11 months before he started recoveriX motor rehabilitation at the recoveriX gym in Schiedlberg, Austria. He lived with hemiplegia of his right side due to stroke. He had 25 recoveriX training sessions, during which he was asked to imagine left or right hand movement (motor imagery). During the first 17 recoveriX training sessions, he wasn’t able to do the 9-Hole Peg test at all. The 9-hole PEG test is a common test of motor function where the patient has to put 9 little sticks into certain positions with the left and also with the right hand. For each hand, the time is measured. In session 18, he was able to complete the test for the first time, and he needed 10:22 minutes. This is a very long time, but it also shows that he was really motivated to do it. It also shows that the patient didn’t give up despite the lack of visible motor function improvement at the beginning.

Why was this improvement not happening earlier?

Christoph Guger: This patient had a tremor and spasticity on the affected right hand. We needed the first 17 sessions to reduce spasticity and tremor. Afterwards, his motor skills improved very quickly. We saw this phenomenon with other patients: First, patients get rid of spasticity and tremor, and only then the motor functions begin to improve.

How did you measure the reduction of tremor and spasticity?

Christoph Guger: We used the Fahn Tremor Scale, where patients have to draw lines and circles. This is used to evaluate tremor. We also used the Modified Ashworth Scale for the hand and for the wrist to assess spasticity. Both tests showed an improvement because of the recoveriX training.

How do you know if a patient becomes better when doing daily activities?

Christoph Guger: We use the Barthel Index (BI) to assess how well each subject can perform daily activities. This score assesses each subject’s independence at feeding, bathing, grooming, dressing, using the toilet and how mobile they are. The therapist asks the subject how well s/he performs these activities – if they are totally dependent and need help, need moderate help or are completely independent. The subject’s improved BI index score indicates greater independence after recoveriX training.

Christoph Guger: The Fugl-Meyer Scale has been used to test the upper and lower extremities. We focused on the upper extremity of the patient. He started with 25 points out of 66 (maximum). After 25 training sessions, the patient reached 46 points, which is an improvement of 21 points. Each recoveriX session is 40 minutes long, so the patient’s training took 16 hours in total. This is a huge and dramatic improvement after only 16 hours of training. The patient was also in a chronic state 11 month after the stroke. At this point, patients often stop improving with standard physical therapies.

What does an improvement of 21 points actually mean? How can you assess this?

Christoph Guger: We are recording videos of our patients while they are doing the tests. An improvement of 21 points means that the patient could rotate the right hand about 90 degrees before the treatment and 180 degrees after recoveriX. Before the treatment, the patient could lift the right hand and touch the nose, but the movement was slow and not smooth. 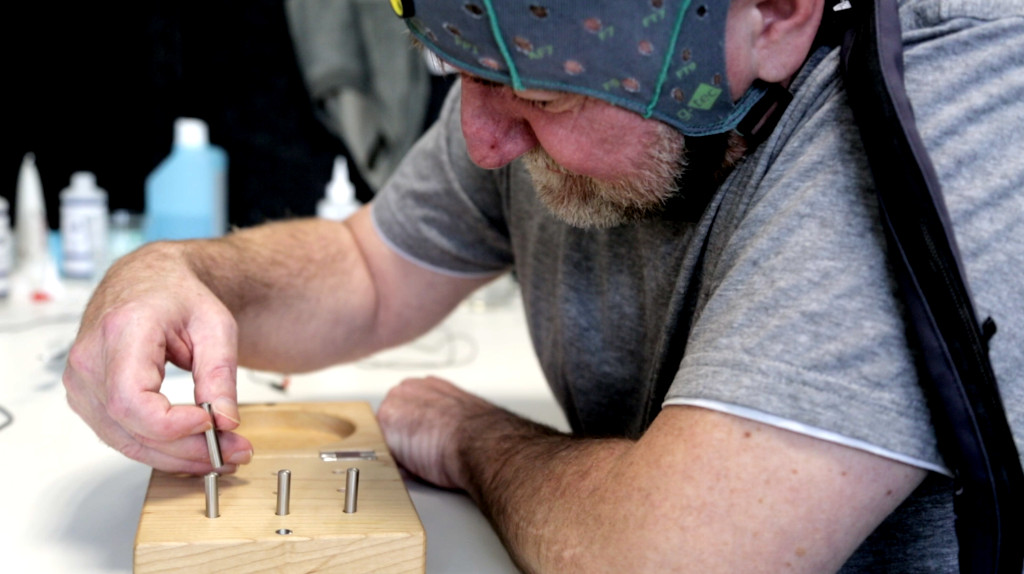 What did you see in the BCI accuracy for this patient?

Christoph Guger: The patient started with an accuracy of about 65 %, and then the performance increased rapidly. In session 7, it was almost 100 %. His accuracy in most subsequent sessions was over 95 %, and he even achieved a performance of 100 % in a few recoveriX sessions. We did also a study with healthy controls, and our mean accuracy for them is about 80 %. This means the patient just did much better than most healthy people. This can be explained by the high motivation of the patients and also by our unique approach in recoveriX, which combines the patient’s motor imagery with avatar feedback and functional electrode stimulation of muscles that produce movement and sensation. Furthermore, all our patients are eager to reach 100 % accuracy in every single recoveriX sessions. Patients even get upset if they don’t reach it.

Which improvements did you see in the EEG data?

Christoph Guger: We calculated so-called ERD maps which show the activation of the left and right sensorimotor cortex. Because of the recoveriX training, we could see much more activation when recoveriX training was finished. This shows us that the brain was adapting and re-learning how to move over the course of the 5000 repetitions of the movement task over 25 sessions.

You mentioned that you are doing functional electrical stimulation? Can you explain what this is?

Christoph Guger: We place recoveriX stimulation electrodes on the skin right over the muscles that are responsible for lifting the right and left hand. Then, we apply electrical current with a small magnitude so that the fingers and the hand are completely lifted up during stimulation. This is called dorsiflexion. This has 3 very important effects: (i) the paralyzed hand starts to move again, which is something that patients like a lot, (ii) muscle spasticity is reduced because the muscles get activated, and (iii) the patient feels that the hand is moving, which activates the sensorimotor cortex. During the stimulation, it is important not to apply too much current because this could hurt, but the device has several safety measures to control the current. Patients report that it is pleasant when the hand gets stimulated, and of course when it is moving. When his motor functions were tested with the Fugl-Meyer-Assessment after completing recoveriX therapy, the therapist reported an improvement of 46 points in total.